Farsighted Installation at the
Royal West of England Academy 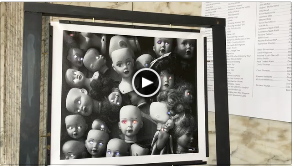 What happens when you combine current IT, the Internet of Things, photography, fine art printing
and metalworking?
It is said that the eyes are a mirror of the soul. In this artwork they are much more, they are a mirror of the world. Changes in the global climate change it in real time. Fluctuations on the major stock exchanges also lead to changes in “friendliness” as well as the occurrence of certain key words in the
news of the major international newspapers. The color changes of the eyes are very nuanced and hardly noticeable at first glance; however, the appearance is never the same.
The viewer receives a small orientation about what’s happening in the world right now through a tweet ticker in the lower right corner of the installation. There the tweets of a large independent newspaper and an American president are running as ticker.
The installation “Farsighted” by Claus Siebeneicher can be seen until the 25th of November 2018 at the 166 Annual Open Exhibition of the Royal West of England Academy.